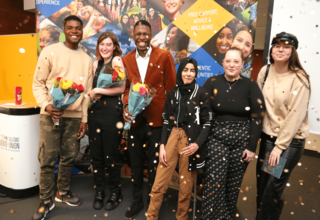 Elections is officially OVER.

The votes were cast 'n counted, the candidates were elected, and most importantly, the free donuts were absolutely delicious!

All jokes aside, this year a whopping 3598 Salford students exercised their right to vote by electing in the new leaders of their Students’ Union.

A table topping total of 24,792 votes came in to see the different candidates take their place within their soon-to-be-starting roles as Voluntary Officers, Full-time Sabbaticals and one of ‘em even ended up being able to call themselves THE PRESIDENT!

Not of the USA, sure. But it is still a pretty cool thing to be able to say…

Mate, if it was me, I’d be walking around campus with a sharp suit, a full security team and some bloke wearing shades and carrying a briefcase just to let everyone know who the hell they were dealing with!

But thankfully, I wasn’t running – and Elections was by any stretch a resounding success! In fact, it was the 2nd biggest turnout that the University of Salford’s Students’ Union has EVER seen!

Now, that MAY be in part due to the pool of cheeky little prizes that WE (being the good eggs that we are) gave away in exchange for your votes!

You might’ve already heard – but if you’ve been living under a rock for a week (or avoiding the people in the blue t-shirts), here’s a quick run down of what some of the voters got their ramen noodle-stained hands on!

Students got 10p off a pint (or soft drink) at their local, by which we mean the one and only ATMOSPHERE. Not only that, but literally about 10 minutes ago some lucky sods who don’t even know who they are yet got punched into a random number generator and ended up being spat out the other side with a hand full of Virgin experience gift cards AND a whole free holiday!

Are they lucky? Yeah.

Am I jealous? Maybe.

Where would I go? Spain!

Now, all this talk (and fantasizing) about holidays reminds me, there’s still one trick up our sleeve, and trust me it is a BIG trick! (Big sleeves, init.)

Y’know how we said if we hit 5000 voters we’d be giving out two holiday vouchers each worth a stinking SEVEN-HUNDRED-AND-FIFTY dirty dobbers?!

BUT we are still giving out ONE of them, just because the turnout was so impressive!

So, if you’re interested in Sun, Sex and- sorry. I mean a nice, wholesome family getaway make sure to keep your eyes peeled on our socials, as well as being on the look out for any emails from us – to see if you’ve won anything!

Even if you didn’t vote – make sure to keep ‘em peeled anyway, as soon enough, we’ll be introducing the newly elected leaders of your Students’ Union to you!

But all in all, good job, guys.

Just don’t forget to send any unwanted holiday vouchers straight to the USSU office, where I’ll dispose of them directly for you.

The largest of congratulations to all of our winners. Your representatives here at the USSU.