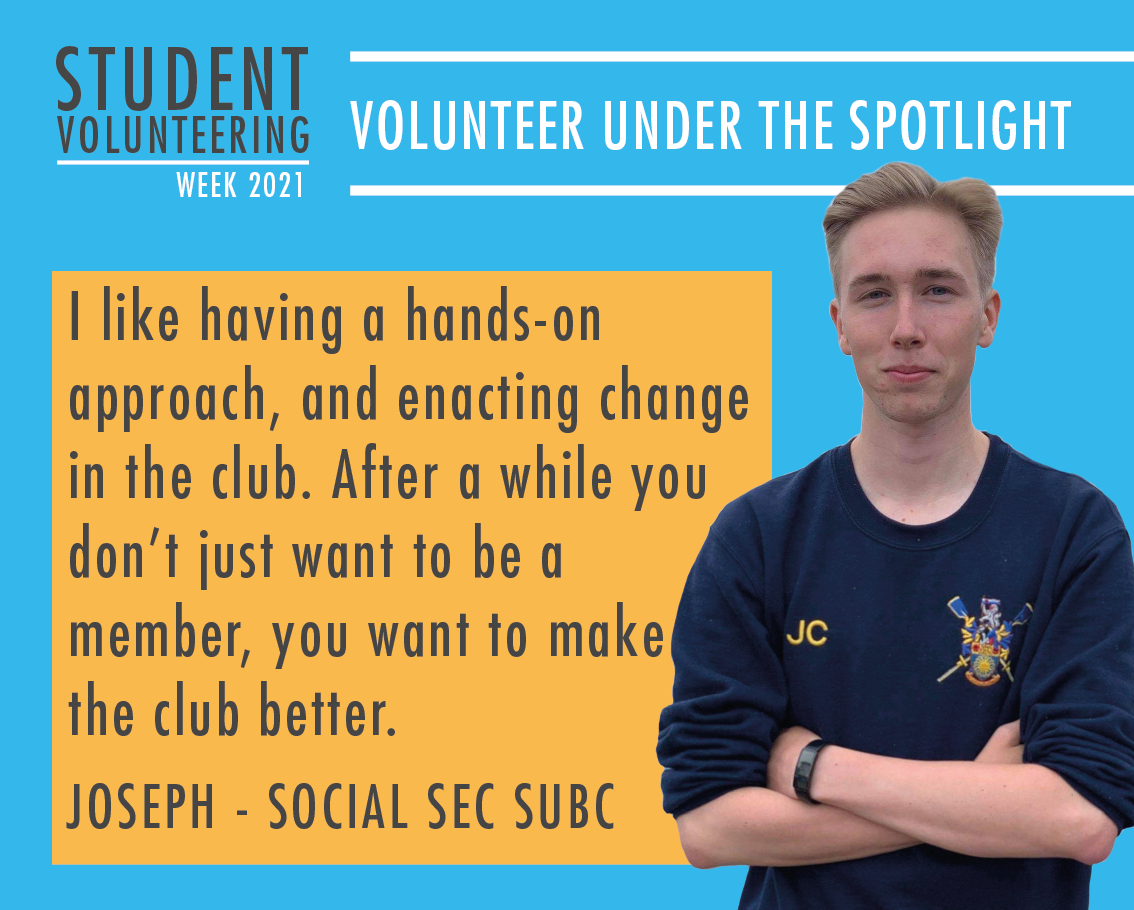 Being a social secretary during lockdown means rowing against the tide. No problem for this digital business student. Joe told us how he’s used virtual quizzes, online skills courses and exercise challenges to keep himself, and his club afloat.

Making a Splash Between Lockdowns

We ran taster sessions in October, and, even though it rained the whole time, almost everybody who tried it out wanted to do it properly!

Normally we have 60 people try rowing, and only 20 or so sign up. This time everyone who got involved was serious about it.

We had to follow the rules and have smaller boats. That meant freshers were in at the deep end. They had to put in a lot of effort to get anywhere.

In our last session before the latest lockdown we were allowed a bigger boat. It was so much easier for the new members to row! They all went a lot quicker. It was good fun, we all dressed up for Halloween.

Every year we have a proper boat race, Salford against Manchester Uni, and I wanted us to still have it this year.

We had a month-long Strava exercise challenge. Each Uni boat team could have 30 people. We could walk, run, or cycle, and the distance got added up into a daily total.

I cycled over 100km every day! I travelled the length of Hadrian’s Wall, coast to coast, in one day. It was a nice summer, and good to be out and about exercising.

Preparing for Next Year

This was the year to fix our boats! Since we haven’t been able to get out on the water as much, we’ve focused on making things better for the club next year, and the year after.

I like having a hands-on approach, and enacting change in the club. After a while you don’t just want to be a member, you want to make the club better.

The best part of the role is seeing how everything works and improving it for the future.

I’ve got all my student volunteering Bronze Awards. I liked the Learning Paths on Linkedin Learning.

The communication courses were useful. You learn methods of helping you progress a bit more. You can go into more depth than you can in a quick committee training.

I put them all up on my LinkedIn CV – you’ve got to do these lovely things that employers like to see!

I’ve learned so much from being on committee. This year called for creativity and imagination. When we couldn’t have socials, I organised quizzes, and movie nights.

I’ve learned a lot about leadership, through running separated events and trainings. I’ve organised stuff, setting everyone challenges, like – okay, everyone has to go for a run tomorrow!

Why Join a Club?

If you’re not in a society at uni, you’re not doing uni! You can do your work, go on nights out, but societies are a way of meeting friends, getting some employable skills, and making you a better and more engaging person. You learn how to engage with people who aren’t in your friendship group. So join Salford Uni Boat Club!

What Joe’s Teammate had to say about him

Joe is a highly valuable member of the team. He’s always putting his name forward for projects and one that stuck out the most would be his involvement in the 2 cities challenge the club competed in during the first lockdown. Joe helped create a spreadsheet and format for results to be tallied with his advanced digital skills. He also kindly supported members of the club during the challenge and motivated the team to succeed. Joe’s role at the club is social sec and due to COVID-19 he hasn’t been able to organise socials but he keeps everyone in the club socialising through quizzes he creates, zoom meetings and group chats. As a club we’ve been prioritising fixing boats and joe is always down at the club helping and learning how to fix boats.