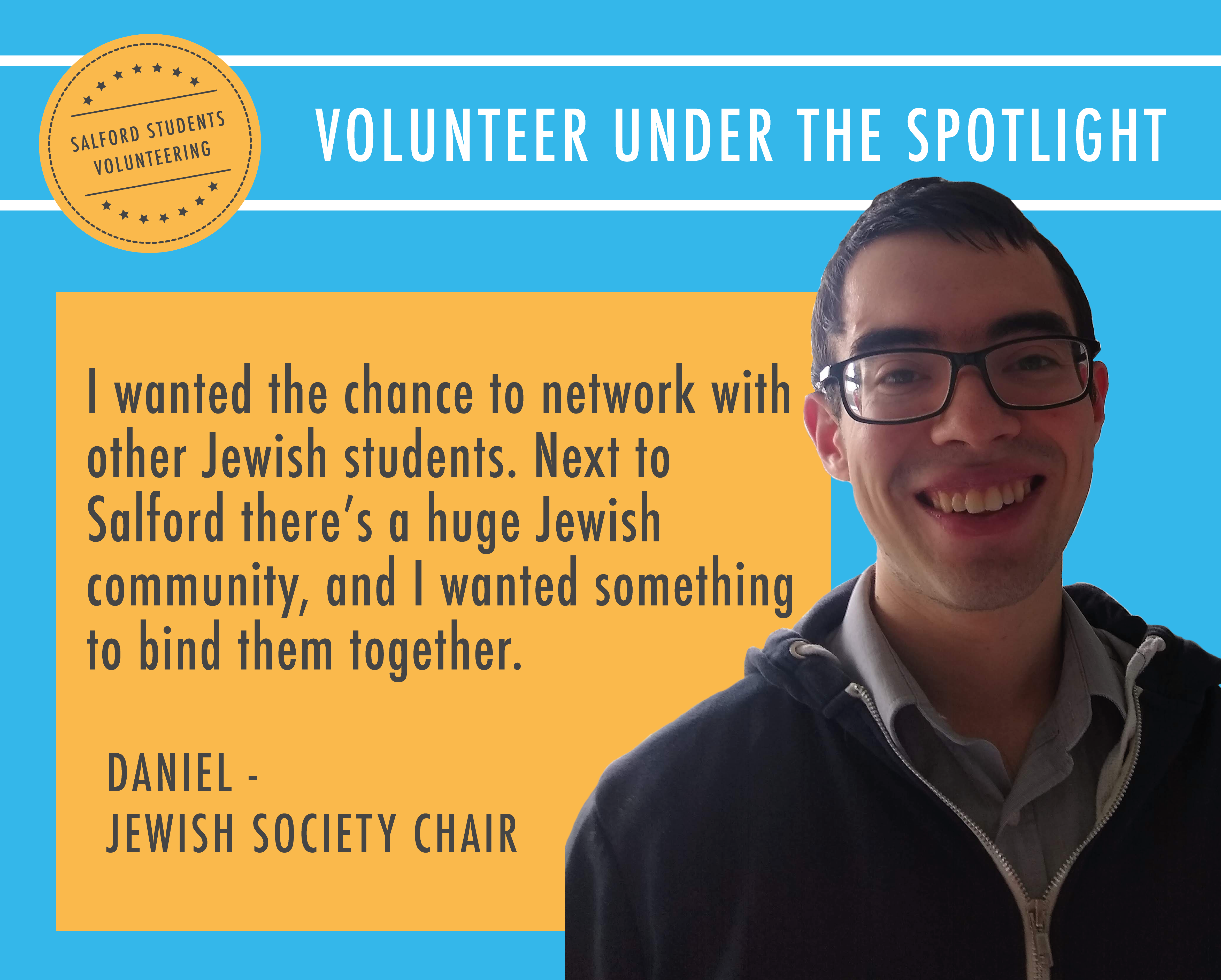 You’ll normally find Daniel making buildings safe, but with JSoc, he made students feel safe. We caught up with him about how he built the Jewish Society from the ground up.

When I started at Salford, I was surprised there we didn’t have a Jewish society here, like at the Uni of Manchester and MMU. I wanted the chance to network with other Jewish students.

Next to Salford there’s a huge Jewish community, and I wanted something to bind them together.

We’re lucky with the provisions the Uni have given us. In the Faith Centre they have a kosher kitchen! Being able to go there for lunch, to meet other Jewish students, that’s a supportive environment.

I met Max, the co-founder of the society through my grandma! She’s friends with his grandparents, and they got talking about their grandsons at Salford. I knew some people who were Jewish in Salford, and Max did too.

We had about 6 or 7 interested at first. We went to Stephen (the Societies Coordinator), in the summer, and got the society set up for September. Now we have a WhatsApp group of 25 people!

We’ve grown exponentially since September and done loads of different events. We have a community within a community on campus

We held a ‘Sukka’ festival at the beginning of the year, and about 40 students attended.

We also worked with Salford City Council on the Holocaust Memorial Day.

We held a workshop in Lewis Lattimer and heard from a student from the LGBT community. It was really eye opening.

Then there was an event in Chapman with about 150 people. There were speeches from the mayor of Salford and a holocaust survivor. The BBC philharmonic orchestra played, and there was a candle lighting ceremony.

Being involved in this society has made me more open minded. Previously I’d have steered clear of ‘all faith’ events, but now I think we should all work together.

I admire the openness of different chaplains in the Faith Centre. They’re willing to have a debate with you, to listen to your perspective.

The Jewish chaplain talks to all the other chaplains, and it’s like, yeah, you can be friends outside your faith, you can have debates and discussions.

Why Should Others Volunteer?

You can change people’s lives at uni. You can help someone have a community. You can find people who feel lost and make them feel comfortable. If someone tells you they’ve received a racist comment, you can help them report it. You can help them speak to the Students’ Union.

Also, volunteering is great for networking! I’ve been to conferences, I’ve met people from the Union of Jewish students, and been to their events. It’s been really great to have support from them, and from the University.

Since he started the society back in September, he’s knocked it out of the park creating a community for Jewish students on campus where they can feel safe and welcome, triaging enquiries and raising any issues with the SU and bringing inspiring guest speakers onto campus.

Get Involved with Jewish Society!

Stay up to date with JSoc via their Facebook page