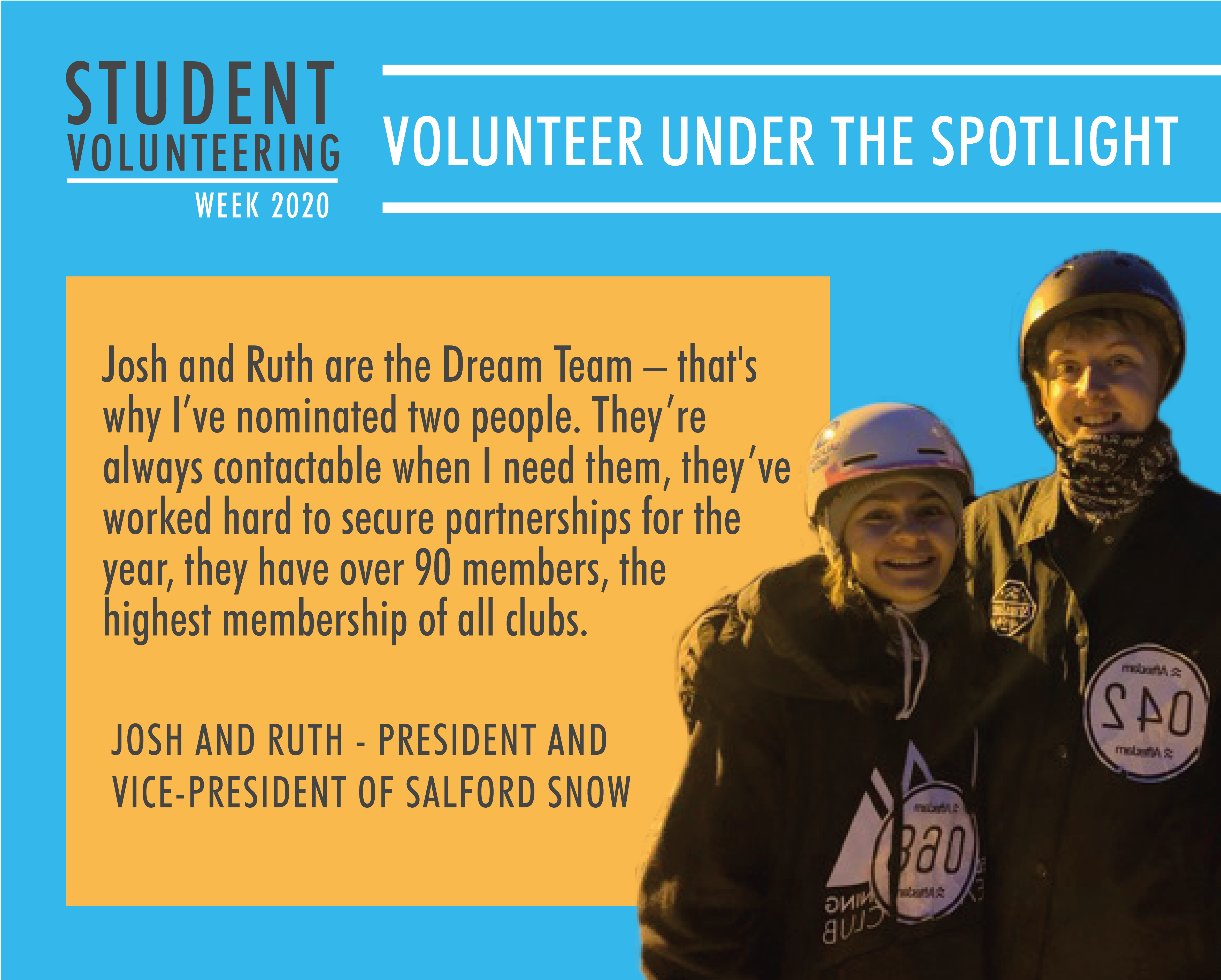 One Cool Team - Josh and Ruth Glide Past Membership Targets

Snow place like Salford Snow, according to President Josh and Vice-President Ruth. In between studying Film Production (Josh), and Building Surveying (Ruth), they help other students to get involved with the sport they love. Ski obsessives? It takes one to snow one.

Josh: I’ve been skiing since I was seven years old, I did racing for a bit, freestyle, then ski instructing. When I saw I could ski through a Uni society, I decided – that's the only thing I want to do.
Ruth: I started skiing when I was three! I dabbled in racing, and I basically chose to come to Salford because of this Snow Sports society! That was it. I did all the competitions, went to all the socials. This weekend I did a backflip for the first time ever
Josh: She got a silver medal for it!
Ruth: Yep, and I’ve skied freestyle as of Saturday! There was a lot of fear going on.

Josh: In the second term of my first year, I decided to go for committee, I spoke to the president at the time, and they told me to go for it. This is my second year as president now.
Ruth: In terms of becoming vice president, the committee at the time encouraged me to compete, and so I did. I thought it made sense, given my involvement so far. We’ve got so much out of the club. We have been given opportunities with snow sports, and we want to continue giving those opportunities to others.
Josh: Snow is like a family. Going for positions is secondary. People love the vibe and the atmosphere. Snow is one of the best things I’ve done in my life.
Ruth: We help people learn to ski! Go to Gloucester! Go to the Alps for the first time!

Ruth: We were getting stuff done over the summer and over September. That’s why it’s eased off this year – because we were prepared. We were meeting at the SU, sending emails and messages. The holiday was a big one – we take 75 people to the alps every year. Obviously, there’s a lot of organization that goes into that.
Josh: In my first year as president it was all new, I was finding my feet. This time around I wanted to get going from June. The trip is in April, and we were preparing it almost a year in advance. We’d already picked the resort by three months after the old trip.

Josh: Our main initiative has been making the society as inclusive as possible – we had 380 sign ups over freshers! It’s about inviting everyone, telling them to invite their friends. We’ve done joint socials with other societies and other Unis. We want to show people in Salford Snow that this is part of a larger network.
Ruth: It’s not exclusive to whether you can ski or snowboard – we have people in Snow who don’t participate, who have an appreciation for the sport. This year we had the biggest amount of beginners – we organized lessons at chill factor for 23 people!

Ruth: The biggest one is resilience. There’s been stress. There's been tears! Dealing with a large group there’s a lot of money involved. To the certain extent the group operates like a business. You have to fumble through until you get the outcome you want.
Josh: It feels like we’re a tour operator, a sports team, a clothing brand, and an events company! We sell T-shirts! We host massive socials!
Ruth: The difference is, we’re not for profit. But we still have to be careful with incomings and outcomings. Our treasurer is great.
Josh: We started the year in debt - and we cleared it.
Ruth: We’re all leaving the club in a better position than when we came into it.

Support From the Students’ Union

Ruth: The thing we’ve got the most out of is the constant contact with Casey (Casey Blagg, Club Sport Coordinator). She’s brilliant and transparent. She provides that constant contact and guidance. Casey steps up to help us. The SU are our backbone so other people take us seriously.

Why Should others Volunteer?

Josh: We’re the biggest sports society, the most fun, the most inclusive. Being in a society is like being in a family. A group of really close friends – you will find friends! For anyone in first year who hasn’t met people, it’s the perfect way to find that support network for when you’re in Uni.
Ruth: You’ll be happier at Uni if you get involved! I live with people I met through the society. It helps that we live near each other – 4 of the committee coincidentally live in the same area. Yeah, I guess you could call it snow street!

A Reference from Ruth and Josh's Volunteering Coordinator

“I’ve chosen to nominate two people because they work so well collaboratively which is a great skill to have as part of a team and a committee.

Josh has spent much of the year organising ways in which the club can function as promised to the students but also keep the club afloat financially.

Ruth has been there to support him every single step of the way, like the Robin to his Batman.

They’re always contactable when I need them, they’ve worked hard to secure partnerships for the year, they have over 90 members, the highest membership of all clubs.

They have hit many obstacles already this year, but I applaud them for their resilience and to come out the other end with a smile on their faces.”

Get Involved with Salford Snow!

Josh: Come to the SU and have a drink and a chat. We have socials every Thursday. Come along, meet the committee. We can chat about how to get involved in the sport.
Ruth: Come September we’ll be running lessons again. For now, our trip is available to book onto, and you can get lessons on there. If you want lessons before September, we’re happy to guide people in the right direction and we’ll facilitate where possible.