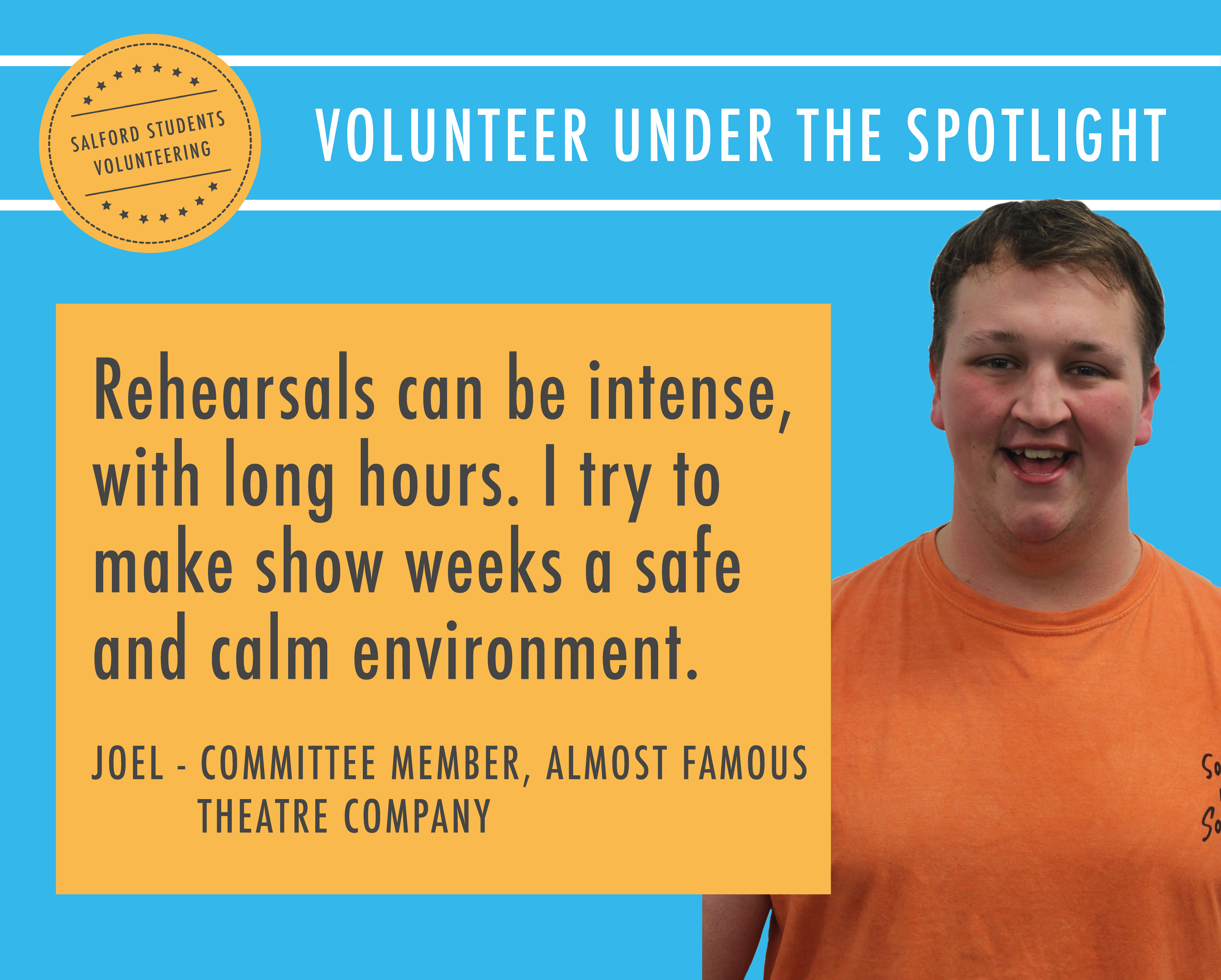 From standing ovations to standing for committee – put your hands together for Joel Conlon!

Joel is no stranger to the spotlight. For two years he’s been a Social Wellbeing Officer for Almost Famous Theatre Society. He helps other students stay centred so they can take centre stage. We got a backstage pass to Joel’s volunteering experience.

I first got involved in Almost Famous as a member. I got one of the lead roles in the play; a science fiction murder mystery comedy. As well as feeling like I was in an episode of doctor who, I found a group of friends who were passionate about doing something I truly loved.

Towards the end of my first year I knew I wanted to do more to help. I spoke to previous officers and decided to stand for a committee position. Since then it’s been non-stop. When I ran again there were 14 people standing for two positions, and I somehow got it again!

On committee, you learn things that can’t be taught. Last year we put on a production of the musical Legally Blonde. It was ten to seven, we were due to start at seven thirty, and we didn’t have any money for our float. I can barely run a bath, but I ran to the student union, got a float and ran back faster than you can say Reece Witherspoon!

The wellbeing part of my role involves speaking to society members and being someone they can talk to about any issues they may have in or out of the society. Rehearsals can be intense, with long hours. I try to make show weeks a safe and calm environment.

I’ve gotten used to speaking to large groups of people. We have 94 members, and I have to address them on social media. I also have to be organised to communicate with companies to plan socials for large groups. We are taking a group of 40 to London in January, to see two West End shows and do a workshop. Two years ago, I never would have thought I’d do something like that!

How did you find the training that the SU provided?

The most useful part for me was getting contact numbers for charities and wellbeing support. It means I know how to help society members when they need more support than I’m able to give them. The support the societies coordinator, Stephen gives us is great.

Why should others volunteer?

Without sounding cringy, societies change your University experience and your life. You get friends that you keep after you graduate. You get experience of management. Even just being a society member can completely change your Uni life with friendships and opportunities. Go for it!

A reference from Joel's Volunteering Coordinator

"Joel is a committed volunteer, going out of his way to support members of the Almost Famous Theatre Society. His numerous hours of work and the effort he puts in deserves to be recognised." Stephen Smallman, Club Sport Coordinator

How can students get involved with your society?

It’s not too late to join and get involved with our shows! Auditions will be held in March for our third semester variety show and play. We’re also putting on two shows this semester, ‘Out of Sight… Out of Murder’ and ‘Grease’.