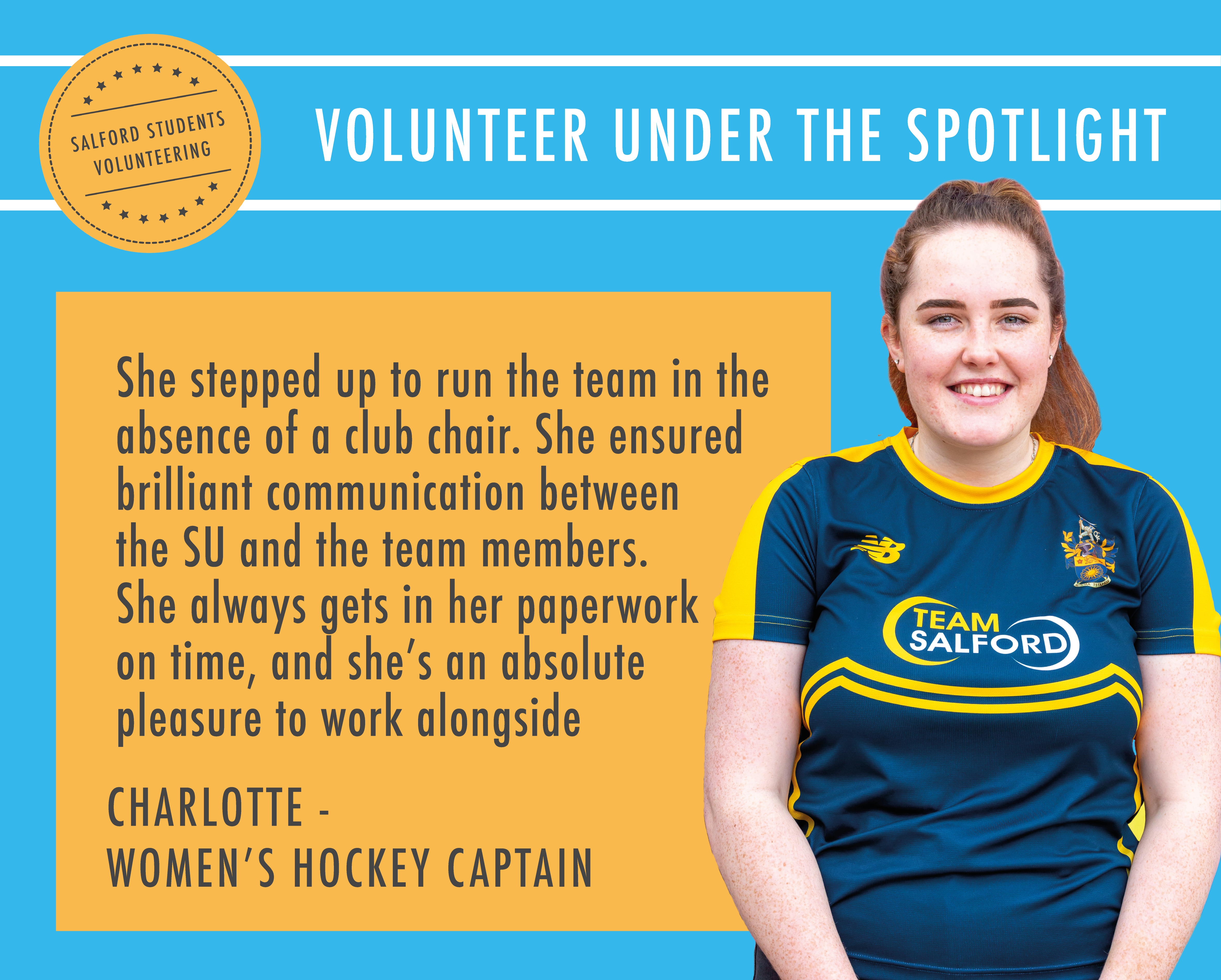 Hockey Captain Charlotte Keeps her Team on the Ball

From the clinic to the Hockey pitch, Sports Rehab student Charlotte Wayman knows how to reach her goals. She gave us a play-by-play of her volunteering.

A Week in the Life of a Hockey Captain

Right girls, I need a team! Who can play on Wednesday? The bus leaves at 1.” I’ll type that in the groupchat.

We have our training in the evening. We’ll focus on a specific target, improving on our performance in the previous game. Monday’s also the deadline for people letting me know if they can play.

“Team sheets are out!” I’ll post in our committee Facebook group, and tag the team for that week.

We meet up before the game, ready for the bus. We play other teams in the North West, so we might be going to Keele, or Liverpool. Then, it’s social time! We might do Pub Golf, or clubbing.

“The Best Thing about Hockey is Being in a Team”

The girls are so respectful and understanding. They made a point of thanking me last week after our last game of the season. It got emotional!

We were huddled together on Oxford road, outside the Armitage Centre, where we play Uni of Manchester. I said well done to everyone for how well we’ve done this season. They said “thank you – you make all of this possible” – I managed not to cry!

When you’re on committee, you have to work as a team outside the sport too. There’s four of us on committee. I work closely with Josh Appleton, the Captain of the boys’ team. He’s been so helpful, and I couldn’t have done it without him.

I emphasise the positive when telling the team bad news – “Yes, the game is delayed – but – we’ll be playing on Monday, when we have training anyway! We’ll all be together! In that instance, we managed to get a full squad together, to get everyone on the pitch.

Once we were playing Keele, and they’d accidentally told us the wrong campus!

Their Women’s Hockey team were on a campus half an hour away. My team were frustrated – they just wanted to play, where we were! I called Karon Pearson (USSU Finance Assistant), and she got in touch with Keele for us. We crammed into our 16-seater and raced over to the other campus.

We arrived with 5 minutes to go until the game! I got the girls to start warming up, and then organised everything with the umpire. It was stressful, but I look back, and we managed to make that game happen!

“I’m nominating Charlotte, for stepping up and running the team in the absence of a club chair. She’s ensured brilliant communication between the SU and the team members. She always gets in her paperwork on time, and she’s an absolute pleasure to work alongside.”

Get Involved – Join Hockey Next Year!

If you're interested in playing Hockey at the University of Salford, follow their Facebook page for opportunities to join in September. For now, get active with FREE 'Give Sport a Go' sessions, on campus running until the 30th March.
Friday 13th March 2020 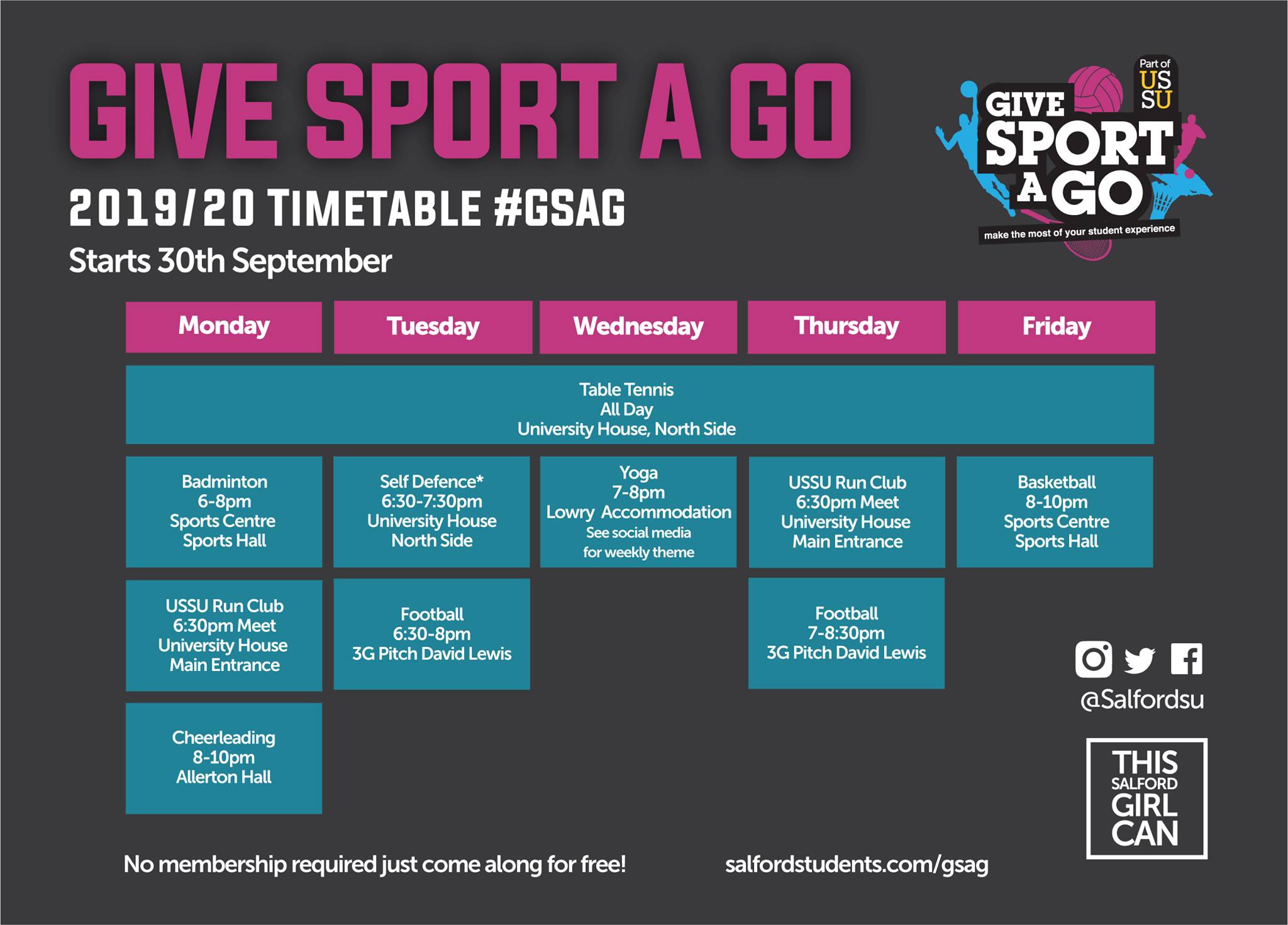