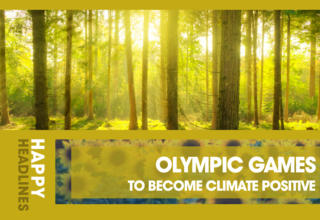 Something you may have missed in the news is plans for one of the biggest global sporting events to become “climate positive”. On the 4th March 2020, the International Olympic Committee (IOC) announced they would be making the appropriate steps to becoming an environmentally friendly organisation, hosting Olympic Games with sustainability in mind. This includes a pledge to make Olympic Games and Olympic Winter Games “climate positive” events from 2030 onwards. To achieve this, IOC will be minimising and compensating for their direct and indirect carbon emissions, as well as implementing lasting zero-carbon solutions for the Olympic games and beyond. Their aim is to counteract any potential negative impacts of their operations with even more carbon savings.

All upcoming Olympic Games will be carbon neutral under the Olympic Agenda 2020, and the IOC is working to ensure sustainability is at the heart of its activities as an organisation. Here’s what they have planned across upcoming Olympic events:

· The Tokyo Olympics 2020 have been postponed for now, however when they do take place, they pledge to be prioritising the use of renewable energy and compensating unavoidable emissions. This includes the construction of venues and Games operations, and any transportation, for which they have promised to provide zero-emission vehicles.

· Beijing 2022 have committed to using 100% renewable energy for all Olympic venues.

· Paris 2024 plans to reduce its estimated carbon footprint to 1.5m t, compared to the footprint of the Olympic Games London 2012: 3.3m t. They aim to achieve this by using 95% existing and temporary venues, and any new permanent construction will be low in carbon. They will also maximise the use of public transport and push innovation in zero-carbon technologies.

· Milano Cortina 2026 and LA 2028 have committed to achieve carbon neutrality and the IOC will work with them to go beyond their direct emissions by implementing innovation sustainability solutions.

IOC will also be contributing to the Great Green Wall project – an African-led movement with the goal of growing an 8,000km natural wonder of the world across the entire width of Africa. Africa's initiative is to help combat the effects of desertification and thereby provide food security, jobs and a reason for communities to stay and avoid immigrating to other areas. Creating a mass green landscape promises to be an active solution to urgent threats facing not only poorer areas of the planet, but eventually the whole span of the Earth – notably climate change; drought; famine; conflict and migration.

IOC’s contribution will include the planting of an Olympic Forest to expand on the work of The Wall, with plans to start from 2021 onwards. IOC’s President, Thomas Bach, expresses his desire to do more than simply “reducing and compensating our own impact” and instead “address climate change and leave a tangible, positive legacy for the planet”. He hopes creating an Olympic Forest will be a huge step towards achieving this goal by implementing a positive impact on the planet beyond simply compensating for the environmental damage the Olympic Games may cause.