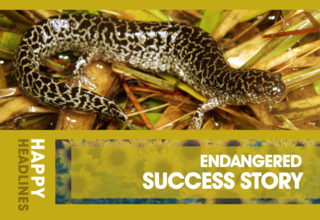 San Antonio Zoo’s Centre for Conservation & Research have successfully bred the critically endangered Reticulated Flatwoods Salamander. Using rearing procedures, biologists have developed protocols for collecting eggs from the Reticulated Flatwoods Salamanders in the wild and have successfully hatched them. Through husbandry protocols, they have then raised the salamanders from aquatic larvae to healthy adults. This is a world first for this species and gives us hope for breeding similar critically endangered species in the lab.

Reticulated flatwoods salamanders once inhabited parts of at least three southeastern states of America – Alabama, Georgia, and Florida. Now there are just a couple of known populations and only one healthy breeding population in the middle of a military base in Florida. The species was last seen in Alabama in 1981, and in 2009 they were declared endangered. This is mainly thought to be due to habitat loss, climate change and shifting weather patterns.

A salamander spends approximately 98% of their life burrowed underground, so researchers know little about them. They do come above ground to breed, however, as females deposit eggs in depressions in the ground before the rain hits and fills the pools. Once the eggs are submerged in rainwater, they hatch, and the larval salamanders go through an aquatic stage before transforming into their land-dwelling adult form and go back below ground.

Last year, a group of larval salamanders were delivered to San Antonio zoo from breeding ponds in the wild, which more than doubled the number of salamanders at the zoo. The conservation centre have been working with the salamander for more than 10 years and have desperately been checking for eggs every day since they began pairing adult salamanders for mating. It is hoped that by coming up with protocols for husbandry practices and for breeding them, they’ll eventually be able to release them and increase wild populations. These conservation efforts are critically important to help keep endangered wildlife from slipping into extinction.

“Part of this story is that if you don’t stick with these projects, if you don’t wait 11 years to breed something for the first time, but you know in your heart that this animal needs what you’re doing and you stick with it, you can work through all these issues,” - Danté Fenolio, the zoo's vice president of conservation and research.