A cold, rainy night in Chester 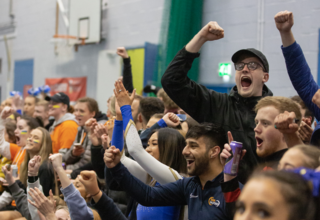 It was a cold, rainy night in the Roman city of Chester.

A grey sky hung over the Parkgate campus like an ill-omened ward.

A warning to any oncoming Salfordian invader.

Still, through the rain, eight black chariots assembled at the old castrum’s gates.

Inside of them sat citizens of Salford.

Their armour a sea of blue and gold, their chests baring the insignias of their clubs, their teams, their societies, proudly.

They knew what they were in for.

After all, that was what they were there for.

The promise of battle.

Though to them, this served as no deterrent.

These gladiators lived for it. Their time in the not-so-sunny City had hardened their bones to the smite of the rain, their bodies trained and prepared for the clash and their boots laced for the glory of the fight.

After the war had been waged, the trophy raised and the throne once again claimed…

Right, *clears throat* just to be clear – nobody was killed on Varsity Day…

While there were kick-offs both on and off the football pitches, thankfully all the battles that did happen were in good sport and high spirit.

As a spectator, it was a joy to watch.

The best kind of emotional rollercoaster; one minute I was relaxing to a comfortable Salford win, next I’m on the edge of my seat watching a fixture’s final minute tick-away as our side tries desperately to edge a neck ‘n neck score, then I’m biting my nails in total uncertainty at that final, all-important announcement…

We went ‘n clawed ourselves the highly coveted, well-earned and hard-fought win.

Sure, while the VARSITY trophy might be falling apart a bit (much like Chester students when the result got announced), it was evident that this win still mattered to us massively.

But, more importantly - what shone through for me was how much this whole event that’s based on competition, really wasn’t about competing, or winning, or losing at all.

At least, not to any of the Salford teams that I saw.

Like when Chester had completed their distance in rowing, and there was no chance of us securing the point – the Salford rowing team could have hung it up there…

There was no conceding.

Not even a thought of it.

Just the onward push of sweat-drenched faces, the exasperated shouts of encouragement, the grunts and growls of pure physical exertion.

When the men’s basketball team started taking a bit of a public spanking by a team two leagues above them, did they quit?

Let Chester walk all over them?

I mean, nobody hates to sound like Gary Neville more than me, but those players shown real character that night.

They showed Chester how to lose in style. (A tip Chester could've done with making use of right after that game, actually.)

Long story short, they done us proud. All of ‘em.

You did yourselves proud, too. The roars of support from you lot were deafening.

A testament to who we are, what we’re about and where we’re from.

After three long years of VARSITY not happening in person – I’ve heard a lot of stories. Now, I’ve finally had the chance to see for myself - what it all means to Salford.

If it’s time to shout? We’ll shout together. When things get sticky, we will stick together and amidst all this, if we end up with a trophy to raise - then guess what? We’ll raise it...

We’ll see you next year.

The things that make us who we are.

But in the meantime…

"WHAT DO WE THINK OF CHESTER?!"